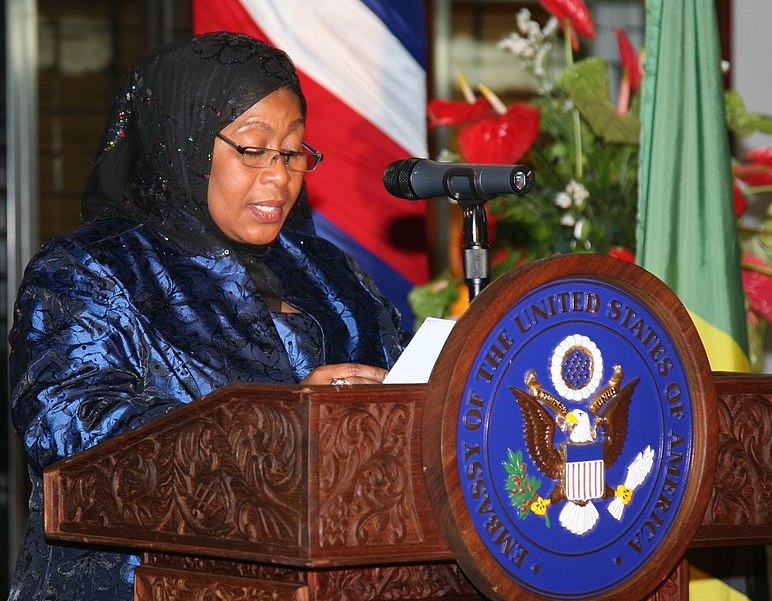 President Samia Suluhu Hassan is Tanzania’s first female president since independence has not only proven that she was well prepared for the job but also demonstrated that women can indeed bring about positive changes when given opportunities to do so.

This can be seen by the way she has repeatedly insisted to make sure all mega strategic development projects started by her predecessor late President John Pombe
Magufuli are completed but also introducing new ones to promote socio-economic development in the country.

For instance, as a result of her diplomatic trip to the United Nations last year she was able to secure a loan of TZS 1.3 trillion (562 million) from IMF which she allocated the funds to address the repercussions of COVID-19 rather than only focusing on combating the disease itself. In fact, she implemented various projects to cater health, education, and water service provision needs to the people of Tanzania especially those based in rural settings.

For example, the funds were used to purchase 20 modern ambulances and 365 vehicles for
hospitals, construction of emergency centers, and provide medical equipment to hospitals from the national to municipal council levels, improving the supply and purchasing of oxygen gas tanks for referral hospitals, purchasing 85 X-Ray machines, putting MRI machines to national hospital and municipal councils, construction of 72 ICU rooms, implementing water projects, improving schools condition and building classrooms to 17 higher education institutions, as well as building 4 ICT centers, as to name just a few.

All these could not have been possible without President Samia’s approach to reassure Tanzania’s development partners around the world of her willingness to curb the disease and most importantly, improve the living condition of her people. Her speech at the United Nations General Assembly where she reiterated her interest to embrace multilateralism and fostering partnerships with other countries to address common global challenges mended diplomatic ties with Tanzania’s allies and opened more doors of opportunities for the most peaceful nation in the East African region.

Her soft-spoken yet firm leadership style which is the opposite of her predecessor’s strict leadership style and policies captured the eyes of the international media houses where her speech at the 76 th UNGA was featured by Foreign Policy magazine among the most important speeches of the assembly.

Her Visit to France

Despite its potential marine and terrestrial natural resources, Tanzania and Africa at large
are yet to massively benefit from what is offered by the richness of the blue economy. On
her recent visit to France where she took part at the One Ocean Summit convened by
President Emmanuel Macron, President Samia demonstrated a huge interest to ensure that
Tanzania which is also bordered by the Indian Ocean benefits from the opportunities that
may come with it as far as the blue economy is concerned. Moreover, her interest to learn
from her French counterpart on issues related to marine and terrestrial natural resources
highlights her call to attract more investments in the blue economy as well as take part in
addressing challenges that impede the country to benefit from its rich ocean resources. Like
many other countries, Tanzania is also facing a series of challenges on its water bodies such
as illegal fishing, climate change, overexploitation, and marine pollution. Therefore,
investments, financial and technical support that may come as a result of her participation
in the summit will significantly diversify Tanzania’s economy and boost its economic growth
through exports of marine and terrestrial products.

On the other hand, she witnessed the signing of 6 agreements of cooperation between
Tanzania and France on the sideline of the summit which targets to accelerate trade,
investments, and bilateral relations between the two countries. For instance, she observed
the signing of agreements that involves rehabilitation of Julius Nyerere International Airport
Terminal II, 178 million Euros Credit Facility to support the construction of phase 5 of the
Bus Rapid Transit project (BRT) and a grant agreement for 1 million Euros to support the
Tanzania Agriculture Development Bank (TADB). She also addressed members of the French
Business Confederation (MEDEF) and invited them to explore investment opportunities in
areas such as livestock, agriculture, energy, mining, and other sectors.

Notably, France has so far invested in 40 projects worth US$ 73.4 million which generated
about 1,885 jobs for local Tanzanians. Hence, this visit is expected to further promote more
investment and bolster trade and economic cooperation between the two countries.

Her Visit to the EU and a tête-à-tête with Opposition Leader Hon.Tundu Lissu
On her visit to the European Council, President Samia Suluhu Hassan expressed her interest
to establish a local plant that will produce COVID-19 vaccines and other diseases.

If the European Union approves Tanzania’s proposal on the matter will be a
big win not only for the country itself but also for EAC, SADC, and Africa at large considering
the current crisis of unequal access and distribution of the COVID-19 vaccines.

Her call to the EU to continue supporting Burundi is not only strategic but also essential
towards ensuring peace and stability in the great lakes region. Burundi has observed a
couple of political and civil conflicts where in most cases Tanzania has ended up being the
host to thousands of Burundian refugees. The EU support to the country will promote social
and economical stability which is paramount for the East African Community’s further economic integration.

On the sideline of her visit to the EU, the president had a tête-à-tête meeting with the
opposition leader of the CHADEMA party, Honorable Mr. Tundu Lissu who requested to
meet her in the Belgian Capital, Brussels to discuss various issues of mutual interest. The
meeting was lauded by the diplomatic community in the country and beyond, diasporas,
and local Tanzanians as a step towards promoting democracy and unity. Moreover, it has
reiterated her previous stance to reunite the country and promote development regardless
of the political differences or affiliations among Tanzanians.

According to a statement by Tanzania’s Presidential Communication Directorate, “Since the
establishment of official cooperation with the EU in 1975, Tanzania has received
development assistance worth more than 2.3 billion Euros equivalent to TZS 5.98 trillion(2.6 billion).”

Therefore, a visit to the EU is not only timely but also strategic towards poverty reduction,
promoting sustainable development, and integrating the country into the world economy.
Going forward, considering the historical ties between the EU and Tanzania, more
diplomatic engagements will be critical in nurturing cooperation as well as stimulating the
flow of investments which are the foundation towards the country’s economic growth.