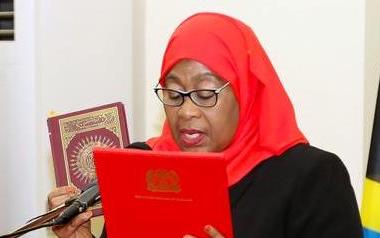 In circumstances surrounded by sorrow and sadness, on Friday 19 March, 2021 Tanzania wrote a new history in its top level administration of the country following swearing in ceremony of Her Excellency Samia Suluhu Hassan to become the President of the United Republic of Tanzania after the sudden death of President Dr. John Pombe Joseph Magufuli on March 17, 2021. The event was also attended by former Presidents Ali Hassan Mwinyi, Jakaya Mrisho Kikwete, Amani Abeid Karume and other eminent persons in the government of the United Republic of Tanzania and that of Zanzibar at the commercial capital Dar es Salaam.

Citizens have been overshadowed with mixed reactions regarding the ability of the newly sworn in President to fit in the shoes of the late President Magufuli because the country was never led by female President before.

Such perspective comes out as a result of the achievements attained by the late President Magufuli in infrastructure, education, water, health, and economy in a very short period of time in the history of Tanzania since his election in 2015. This comparison from the citizens is also associated with some differences in the personalities of the two leaders and social/cultural constructs.

In his era, President Magufuli was the dominant figure in the politics of Tanzania and the East African region in general something which most of the people think the current President might struggle to manage. Besides, in Tanzania just like other African countries and the world in broad, men have had sort of a myth believing that women are incapable of assuming certain duties like presidency, and this is what drives such skepticism among the people. Nevertheless, others believe that President Samia Suluhu Hassan will follow President Magufuli’s footsteps in implementing various strategic projects which are yet to be finalized such as construction of the huge hydro electric power dam at Rufiji River and Standard Gauge Railway and establish other new projects as stipulated in her party (CCM) manifest for the betterment of the country.

The history shows that Tanzania has had the likes of the late Bibi Titi Mohamed, Lucy Lameck, Tatu Mzee, Haleema Hamees, Salam Ferouz, Mwanasubi Ali, Fatma Abdallah, Emperor Liti and Mkomanile whose boldness and ability were well known amongst Tanzanians during the struggles for independence. Specifically, President Samia Suluhu Hassan who is known for speaking very politely and softly is in the advantageous position to lead the country towards its lifelong objectives because of being the first adviser to the late President, which means she had learnt a lot from late Magufuli in terms of leadership and decision making. This was justified by the President herself during her speech to the public after taking an oath when she called Magufuli her teacher and instructor.

Samia Suluhu Hassan who was born in Zanzibar in 27 January 1960, held various roles such a Clarke of the Ministry of Planning of Zanzibar, Member of Zanazibar House of Representative and Minister of labour in Zanzibar from 2000 to 2005 where she was the only female minister in the cabinet. Samia was also the Minister of Tourism in Zanzibar from 2005 to 2010. In 2010 Samia Suluhu Hassan contested for Makunduchi Parliamentary seat and worn the position for more than 80 percent to serve the constituency from 2010 to 2015, during the same period she was appointed as Minister of State for Union Affairs by President Jakaya Mrisho Kikwete. In 2014 Samia Suluhu Hassan was elected as the Vice Chairperson of the special assembly mandated to draft a new constitution of Tanzania. In 2015, Samia Suluhu Hassan was chosen by late President Magufuli as his running mate in the year’s general elections.

Significantly, President Samia Suluhu Hassan argued Tanzania to unite in this period of sadness and on; “This is a period of burying our differences, it is not a period of looking to the past. It is the period of uniting ourselves together as a nation, let us wipe each other tears and move forward.” Samia stated in her speech to the audience on Friday.

These strong words shade light on the beginning of the new era of presidency in the East African country which is also known for being peaceful one in Africa and the world in broad spectrum. Will Samia reach expectations of Tanzanians? The question waits for President Samia Suluhu Hassan to answer